So Monday I did get some craft done while I visited a friend, but it's not quite neat enough to show you yet (ends need sewing in), so I'll do that another day. This is a quick post detailing what happened when I got home. Please skip the next paragraph if you don't want details of some sad news.

I got home to some odd chirping from my birds. Found Tanuki (funky hair bengalese finch) dead in the nest, with Ushio beside it (still no idea who is male/female). Poor Ushio died a few minutes later in my hand. I'm not sure why they died, but they did. It was totally horrid having no birds in the cage when I went to sleep and when I woke up. Even when they sleep I get the occasional chirp and shuffling about. It was a bit of a long night.

Fast forward to mid-morning the next day and I have 2 new feather babies! The silvery traditional looking one is Tomoya, and the paler one is Hibiki. They are male zebra finches (females are extremely rare). It's a joy to have zebra finches again, their sound is distinctive and I'd missed it a lot.

I'm super sad that I didn't get longer with Tanuki and Ushio, who while not zebra finches were fun in their own way. I was still getting to know them, and I love them very much and miss their little selves ducking in the nest when I peek in on them. 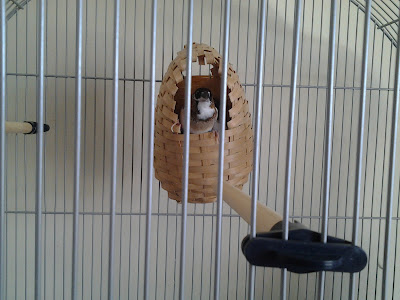 It won't surprise long term blog readers to hear that the names were chosen from anime characters (I'm enjoying having Japanese names). I had to think quite a while for names not because there were so many to choose from like girls' names, but I wanted to pick nice guy names (and I pay far less attention to the guys in anime shows). Tomoya is from the classic and one of the best anime ever, Clannad + Clannad After Story.
Tomoya in the anime/manga is a lone ranger but it's a sweet romance (nothing imappropriate, he and Nagisa (who I adore) barely hold hands, watching the two grow through their teens and start a family. A lot of tissues are needed for that anime! Tomoya the bird worried me a little because as he was being caught in the pet shop he seemed to be going for the other birds. When I first got them home he did go for Hibiki. Males can be terrortorial, but he seems to have calmed down.

Hibiki is from the skating anime Pretty Rhythm Aurora Dream. He is a singer in a boy band, and eventually becomes engaged to Rhythm, one of the main characters (they also feature in Pretty Rhythm Dear my Future). I realise Rhythm's name may sound odd, I'm so used to it that it seems perfectly normal to me. She's impulsive, works super hard on her skating, and has a big heart. Hibiki the bird is holding his own against Tomoya and  sometimes sings along with the latter.

Last night I spied them huddled together on top of the nest at  my bedtime. If they don't figure out they can go in the nest by  the weekend I'll buy them an open style nest (the current one they have to duck into.) I want them to be able to snuggle down somewhere at night - sleeping on the perch/on top of the nest can't be that comfy for them. Maybe they will have a brainwave and realise what the nest is for, if not I'll make things a little easier for them.

Anyway, that's all for today. Having a quiet day tomorrow which will be nice after a mixed start to the week.

Posted by Nayuleska at 5:37 pm

Let me know what you think of my ideas, creation, and ramblings! 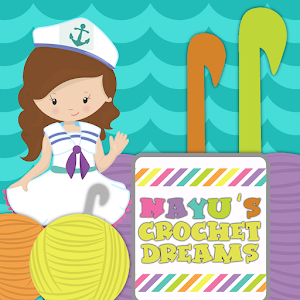 Hi, I'm Nayu! Welcome to my blog. Here I'll put fun posts about my craft projects, some which will be on my Etsy shop. I enjoy crochet and cross stitch, am learning machine sewing. I'm also a writer, gamer, book reviewer & reader - click on this image to find out more!

Subscribe by email to be the first to know about my latest projects!

On my craft agenda at the moment...

...I'm working on a cute blanket for myself in pastel colours! 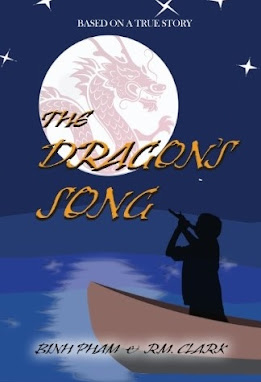 ...I have a guest blog post from the authors of refugee inspired tale: The Dragon's Song

Please do get in touch!

Please give extra support for my blog posts by buying me cake/yarn! 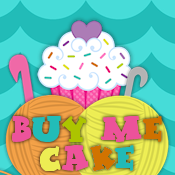 Click on the pic to head to the donate page - thank you in advance! My real first name is used on the page, it's still me.